A History Lesson on How to Solve Police Brutality 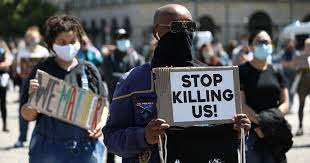 Over 500 civilian noncombatants, mainly women, children and the elderly, were massacred by American troops in My Lai, Vietnam on March 16, 1968. Only one military person involved was convicted, Lieutenant William Calley. Despite a conscientious helicopter pilot, officer Hugh Thompson, reporting the tragedy and demanding an investigation, the Army did what many police departments do in the face of criticism, they whitewashed it away.  Although they conducted an investigation "on the surface" which involved everyone from the ground soldier to the highest command, the massacre was ignored and false reports were issued commending the operation known as "Pinkville."  Police departments are set up to respond the same way with their "internal affairs" investigations.  Much is swept under the rug and true accountability does not exist.

The world became aware of My Lai because the media got a hold of the story.  A young GI Ronald Ridenhour heard of the atrocities first hand from his fellow soldiers and wrote letters to the President and other officials in Washington.  A dogged reporter, Seymour Hersh of the New York Times relentlessly pursued the facts to a point the Army was forced to conduct another investigation (the "Peers" investigation).  Due to the media (a widely watch 60 Minutes special) and a Congressional investigation the public demanded accoutability.   When it was all said and done, the truth came out.  My Lai greatly influenced pulling out of the Vietnam War. Despite only one soldier being held accountable (even his sentence was commuted), the lesson was and remains clear.  One cannot enturst to itself accountablity.  The Army would have never admitted the My Lai massacre on its own.  We cannot expect that police brutality will end if the police are left to answer to themselves. Internal affairs departments must be replaced by independent citizen accountablity boards. Law enforcement must answer to the public it protects. To assume that it can properly police itself exposes everyone it "protects" to danger, including the good police officers who are not in a political position to stand up to the wrongdoers who control the police disciplinary process.  In order to encourage and promote good police officers, they must feel protected by a fair process.  To allow the police to conduct investigations of their own wrongdoings is akin to letting the fox into the hen house.

The aftermath of My Lai is that we should all take a lesson in history and never accept wrongdoers to be in a position to right a wrong.  My own 25 year experience being a criminal defense lawyer and a witness to much wrongdoing by the police has taught me that internal affairs are not to be relied upon for truth or accountablity.  Create accountablity boards for our police departments nation wide. This will do much more to stop the George Floyd incidents of tomorrow than anything else. We must remember, never trust accountability in power.  Anchor accountability to independence and objectivity. Create citizen boards, much like school boards.